Gotham Knights Wiki
Register
Don't have an account?
Sign In
Advertisement
in: Heroes, Members of the Bat Family
English

Edit
watch 01:36
We're Getting Mutants in the MCU - The Loop
Do you like this video?
Play Sound

Dick Grayson, known by his alias Nightwing, is a member of the Bat Family.

Dick Grayson is a natural leader, an optimist, and the most charismatic of the Bat Family. He grew up in an unorthodox but loving circus family, so he values close personal bonds. Dick believes that, for the fight to be worth it, there must be something real to fight for; and that something has always been other people. He was Batman's first protégé before becoming a hero in his own right.

Dick boasts about his mastery in acrobatics and is an expert at taking down enemies with his signature dual escrima sticks.

Dick is a tall young man with mid-length black hair and blue eyes. In his casual attire, Dick wears a brown jacket over a gray shirt with dark brown pants and boots. As Nightwing, he wears his traditional blue and black suit similar to his comic appearance with his logo on the chest plate. Like his other video game appearances, Nightwing wears an armored cowl with a domino mask and keeps his dual escrima sticks attached to his back.

Like the other Knights, Nightwing's gear is entirely customizable by the player using blueprints and crafting materials.

Acrobatic Combatant: Nightwing's fighting style is acrobatic as he flips and moves around the fighting area hitting one villain after another. Many of his evasions and finishers include athletic flips and tumbles only a Flying Grayson could perform. 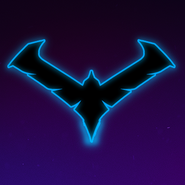